The Situation in Ukraine

"On Forgiveness Sunday, March 6, 2022, at 20:30 pm, Putin's troops shelled the city of Malin in the Zhytomyr region in Ukraine. Our Church of the Protection came under fire. The temple received significant damage - the roof was destroyed, the domes were damaged, frames, glass, and doors were broken. Inside, the iconostasis was demolished by a blast wave, etc. Only the walls remained of the temple. Rector Archpriest Georgy Storozhitsky, his mother Zinaida and one of the parishioners at that time were in the basement, where windows and doors were also torn out. Thank God, everyone survived. The military offer everyone to leave, as heavy fighting is expected in Malin." 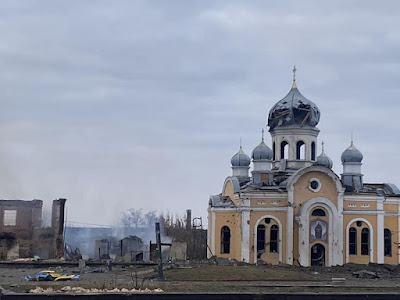 It's not clear whether this church was targeted deliberately because of Metropolitan Agathangel's opposition to the actions of President Putin, or was hit as part of a general shelling of the town.

Please pray for Metropolitan Agathangel and his flock and especially the sisters of the Saint John of Shanghai and San Francisco Convent, Odessa as the shelling and missiles edge closer to them.

Posted by Saint Edward Brotherhood at 15:07