World War One ended at 11 a.m. on the 11th November 1918 with the signing of the Armistice that signalled the defeat of Germany. As a consequence, the 11th of November is kept as Remembrance Day on which we commemorate those members of the British and Commonwealth armed forces who have died in the service of our country. The nearest Sunday to the 11th is also kept as Remembrance Sunday which is marked by a service led by Bishop of London at the Cenotaph in London. On both days, a two-minute silence is kept at 11 a.m.

Remembrance Sunday is problematic for traditional Orthodox Christians for two reasons. Firstly, there is no provision in the services of the Orthodox Church for a two-minute silence during the Divine Liturgy. Secondly, Remembrance Sunday is essentially a Church of England service, and we should not participate in joint prayers with those who are not Orthodox. These problems however, do not mean that we cannot wear a poppy – far from it! The poppy itself is not a religious symbol and we should all wear one or at least donate to the British Legion’s Poppy Appeal that offers support both to the relatives of the fallen and also to members of the armed forces wounded in the service of our country.

The Poppy Appeal’s symbol, the red poppy, was chosen as a non-religious symbol of remembrance for those fallen in battle because it grew on the battlefields where some of most savage battles of WW1 were fought. These fields had been reduced to a sea of mud by almost continuous shelling and were littered with unburied bodies. The poppy is a symbol of hope that something beautiful can emerge from chaos and bloodshed. The poppy was not chosen because of its blood-red colour.

The Early Christians honoured the Roman Emperors as St. Peter the Apostle teaches: ‘Honour all men. Love the brotherhood. Fear God. Honour the king’ (1 Pet. 2:17). We therefore pray for the Queen in every service of the Orthodox Church because she is our Head of State, and we honour our armed forces because they are servants of the Crown and are prepared to offer their lives in defence of our country.

Showing respect to our military though, does not mean that we have to approve of every military conflict that they are involved in. It is not at all contradictory to wear a red poppy and at the same time campaign against ill-advised or illegal military interventions.

In addition, we, as Orthodox Christians living in the west, are in a peculiar position because Britain and the Soviet Union were on the same side in WW2. As a result, the British Government had to turn a blind eye to the crimes committed by the Soviet Communists who were directly responsible for an estimated twenty million deaths. 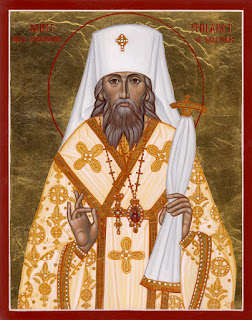 Regardless of the rights and wrongs of British military interventions, we support the Poppy Appeal because the poppy is not a political symbol, but a remembrance of sacrifice. Christ Himself said: ‘Greater love has no man than this, that a man lay down his life for his friends’ (John 15:13). The men and women that we remember by wearing a poppy died to preserve the freedoms we enjoy in the U.K. today – the most important of which, for us, is the freedom to worship freely as Orthodox Christians. This sacrifice is especially apparent today; members of the armed forces play a vital role by supporting the police in protecting us from terrorism at home in the U.K.

There is no reason that we cannot wear a poppy on religious grounds. As Orthodox Christians we are trying to uproot evil and hatred from within our hearts, but we realize that nations sometimes have to defend themselves, and others, against tyranny. Every attempt must be made to avoid war, but sometimes war is unavoidable as Saint Philaret of New York (above) explains:


War in itself is absolutely evil, an extremely sad phenomenon and deeply contrary to the very essence of Christianity. Words cannot express how joyous it would be if people ceased to war with one another and peace reigned on earth. Sad reality speaks quite otherwise, however. Only some dreamers far removed from reality and some narrowly one-sided sectarians can pretend that war can be omitted from real life. [1]


An opposition to all war is termed ‘pacifism’. Pacifists are opposed to war in any circumstances. Saint Philaret refers to these people as ‘dreamers’. Their position is neither realistic nor Orthodox.

According to pacifists, war must be prevented at all costs by countries being nice to their enemies. It doesn’t matter if the enemy doesn’t want to be nice or is completely dedicated to evil. For example, British pacifists supported the Nazis during the 1930s. The Peace Pledge Union (PPU) joined with British fascists in proclaiming their support for Nazi Germany at the time when the Nazis were murdering thousands of disabled men, women and children and preparing the Final Solution. Their support continued even after the start of WW2.

We are called by Christ to be peacemakers (cf. Matt. 5:9), but Christ Himself tells us that ‘ye shall hear of wars and rumours of wars: see that ye be not troubled: for all these things must come to pass…’(Matt. 24:6). It is clear then, from Christ’s words that wars cannot be avoided. Genuine Orthodox peacemakers do not naively oppose all war, but strive to purify their hearts by repentance and by rooting out all malice and hatred for their neighbour. Christ calls us to love our enemies and pray for those who persecute us (cf. Matt. 5:44). Acting in this way requires an extremely high degree of spiritual strength. Nonetheless, the saints of the Orthodox Church have achieved this by their love for God and neighbour.

God gave the command ‘Thou shalt not kill’ (Ex. 20:13) as one of the Ten Commandments, but He also commanded the Israelites to fight against their enemies. This verse is more accurately translated as ‘Thou shalt not murder’ which is a very different act from killing someone in warfare. We are actually called to a much higher commandment. Christ teaches: ‘You have heard that it was said to the ancients, “Do not murder, and anyone who murders will be subject to judgment.” But I tell you that anyone who is angry with his brother will be subject to judgment’ (Matt. 5:21).

The Christian martyrs are perhaps the perfect examples of what Christ commanded and what St. Peter teaches here: ‘Do not render evil for evil, or railing for railing: but on the contrary blessing; knowing that you are unto this called, that you should inherit a blessing’ (1. Pet. 3:9). The martyrs surrendered themselves to the sword and fire for the love of God, but there are also many Orthodox saints who are remembered not only for their piety but also as leaders of their Orthodox people in wars.

For many years, the Peace Pledge Union (PPU) that we mentioned above has been promoting the white poppy as an alternative to the traditional red poppy. The white poppy seems harmless enough, but it is a symbol of the wider peace movement. We have mentioned the PPU’s support of fascism during WW2. In addition, during the Cold War many other western peace organisations were simply fronts for Soviet political activities. These ‘peace’ organizations called for the disarmament of NATO forces, but were silent about the millions killed by Communism in the Soviet Union. For these pacifists, the word ‘peace’ actually meant ‘communist victory’.

Even though pacifism is not Orthodox, the taking of human life is a sin however it occurs. Even soldiers who have justifiably taken human life in battle are still called to repentance by the Church. In his 13th Canon Basil the Great states:


Our Fathers did not consider the killings committed in the course of wars to be classifiable as murders at all, on the score, it seems to me, of allowing a pardon to men fighting in defence of sobriety and piety. Perhaps, though, it might be advisable to refuse them communion for three years, on the ground that they are not clean-handed. 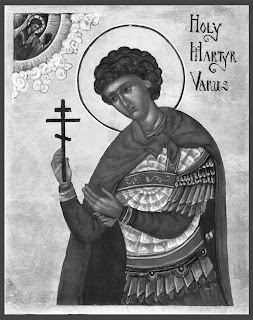 We pray for Orthodox Christians who have died in battles, but how should we remember the non-Orthodox British and Commonwealth soldiers who have given their lives in the service of our country?

We can pray for the non-Orthodox fallen in battle in our private prayers; the Holy Martyr Varus (right) is called upon in particular to intercede on their behalf. We can give money to charity on their behalf by supporting the Poppy Appeal. Throughout out the year we can help veterans in our parish and the wider community by visiting them and inviting them to our homes especially if they are living on their own.

Our support for the Poppy Appeal is completely compatible with traditional Orthodoxy. We shall conclude with the some words of Saint Cyril the Enlightener of the Slavs on how we should behave as Orthodox Christians: ‘We meekly endure personal offences; but as a society, we defend each other, laying down or lives for our neighbours’.