An Explanation of the Nativity of Christ Icon

The Nativity icon is not just an artistic depiction of the birth of Christ in Bethlehem. Like all icons, the icon of the Nativity of Christ depicts not only earthly events but also spiritual realities. An icon, even though it is a painted image, is joined to its prototype in a mystical way and participates in the holiness of the person whose face is painted upon it. In other words, the Nativity icon doesn’t just portray Birth of Christ; the icon shares in the holiness of the event.

In the centre of the icon is the cave with Christ lying wrapped in swaddling-bands in the manger. The darkness of the cave represents the darkness that once enshrouded the whole of creation because of sin. The rocky terrain and the sparse vegetation recall the wilderness through which the Israelites wandered for forty years and in which they were fed with manna from heaven. Just as formerly the Son of God rained manna from heaven on the Israelites, now He gives us His Body to eat in the Eucharist; Christ is, as He teaches in the Gospels, the Bread of Life (John 6:35). The cave also signifies the Church; the manger is the altar on which the sacrifice of the Eucharist is made and from which we partake of the Body and Blood of Christ that nourishes our souls.

A ray of light shines on the cave and the star that guided the Magi is drawn developing from this ray. The star is depicted like this to indicate that it was not a normal star but a supernatural phenomenon with the appearance of a star. This is clear, as St. John Chrysostom explains, from the direction of the star’s travel and from the fact that it descended from heaven and settled over the exact place where Jesus was born.

The Mother of God is shown reclining in the centre of the cave in a peaceful manner signifying that this birth was contrary to the law of nature. Sometimes she is depicted seated to emphasize this point even more. In Orthodox icons the Mother of God is not depicted kneeling before the manger in worship.

The Infant Jesus is shown wrapped in swaddling bands as was the Jewish custom recounted in the Gospels (Luke 2:12). These bands also foretell the winding sheet with which Christ will later be wrapped for burial.

The ox and the donkey offer their adoration as prophesied by Esaias: ‘The ox knoweth his owner and the donkey his master’s crib’ (Is. 1:3). The ox symbolizes the Jews of the Old Testament that were subject to the Law and the donkey, the traditional beast of burden, those non-Jews weighed down by the sin of idolatry. Oxen and donkeys are fed with hay from a manger; now Christ, by becoming incarnate, grants mankind His Body for food.

In addition, through becoming man and being born in the manger, Christ has re-created man and ‘broken down the middle wall of partition’ (Eph. 2:14). He has removed the yoke of the Law from the Jews and the heavy weight of idolatry from the nations making, of the two, ‘one new man’ as Saint Gregory of Nyssa teaches. The festival of the Nativity of Christ is therefore not a feast of creation but of ‘re-creation’.

The cave, the manger and the swaddling bands all demonstrate God the Word’s condescension towards mankind. In the hymns and theology of the Church this is called ‘kenosis’ which means ‘self-emptying’. Christ empties Himself to become man, yet does not cease to dwell with the Father and the Holy Spirit.

In the bottom right-hand corner of the icon Christ is shown being washed by two midwives. This washing scene is based on the apocryphal Gospels of Matthew and James and was the cause of some controversy in the eighteenth century. The dispute arose because the washing scene appears to suggest that the birth of Christ was according to nature. However, we know from the teaching of the Church that the Theotokos was a virgin before, during and after childbirth. In other words, the seal of her virginity remained even after childbirth and she gave birth without defilement and without the need for washing. This event was foretold by the Prophet Ezekiel: ‘This gate shall be shut, it shall not be opened, and no man shall enter in by it; because the Lord, the God of Israel, hath entered in by it, therefore it shall be shut’ (Ezekiel 44:2).

Most early icons depict this bathing scene and as long as it is correctly interpreted it is not a problem. The washing was part of Christ’s condescension to human custom in the same way as He underwent circumcision and baptism. This scene does not indicate any uncleanness, but teaches us that Christ became man in reality and not in just in appearance.

The angels are depicted both in their role as messengers proclaiming the birth of Christ and as worshippers of His nativity. This two-fold ministry of the angels is depicted on this icon by some of the angels lifting up their hands to heaven, giving glory to God and the others bending down towards mankind to whom they bring good tidings.

Beneath the angels, on the left-hand side are the three Magi. The Magi are depicted as of differing ages and not the usual three elderly men that we find on western Christmas cards. This is to emphasize that revelations occur independently of age and experience. In some icons the Magi appear twice – both on their journey and presenting their gifts to Christ.  On the right-hand side a shepherd is depicted playing a reed pipe and joining chorus with the angels.

The plants and rocks are included together with the sheep, men and angels to signify that the Nativity of Christ is a historic event in time, and also has a spiritual significance for the whole world. Christ is the ‘Rod of the root Jesse and the flower that blossomed from his stem’ (cf. Isaiah 11:1-2). The tree at the bottom of the icon is a symbol of the Tree of Jesse. Christ was from the lineage of David – the Prophet King David was the son of Jesse.

To emphasize the miraculous nature of Christ’s birth, St. Joseph the Betrothed is not portrayed with the Virgin and Christ, but is seated alone (in the bottom left-hand corner of this icon) looking downcast. This recalls the temptation that he underwent undergone when Joseph realized that the Mother of God was expecting a child (cf. Matt. 1:19). The devil, disguised as an old shepherd, is shown tempting him. The Mother of God, instead of looking at the Christ in the manger, gazes with compassion on Joseph as she perceives his inner turmoil.  Saint Joseph,  even though he is a witness and guardian of this mystery, is detached from the Mother and Child because he is not Christ’s father. 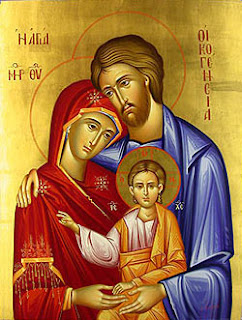 This positioning of St. Joseph is important in safeguarding the traditional teaching of Christ’s birth from a Virgin. Placing Joseph next to the Mother of God could lead us to believe that Christ’s conception was earthly and not of the Holy Spirit. Moreover, it would over-emphasize the ‘normal family’ aspect and fail to depict, at least as much as we are able to, the mystery of the Son of God’s self-emptying to become man.

The Orthodox Church, therefore, does not accept western portrayals of Joseph the Betrothed, the Mother of God and Christ in a ‘family portrait’ pose. This  ‘Holy Family Icon’ (right) might be called an ‘icon’ but it is not Orthodox. In this depiction, the ‘Holy Family’ are represented as a normal family; the Orthodox Church does not depict the  St. Joseph the Betrothed hugging the Mother of God because this would imply some earthly, carnal union between them. In addition, in this icon, Saint Joseph resembles Christ in appearance. This practice is unknown to Orthodoxy because it implies that St. Joseph was Christ's father according to the flesh. Orthodox icons always depict St. Joseph the Betrothed as an older man. 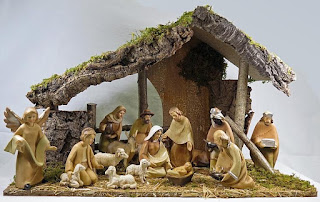 The safeguarding of Orthodox theology by our iconography explains why the Orthodox Church does not have a crib (nativity scene) in church and why we do not perform nativity plays. Both these examples unintentionally distract from the central point of the Nativity scene in the Orthodox icon – that the Word of God became incarnate. The statues in the Roman Catholic crib over-emphasize the human aspects of the birth of Christ much in the same way as dressing up children as Mary and Joseph introduces a fleshly sentimentality into the feast.

Christmas is beautiful but not because a beautiful child is born; it is beautiful because this child is the Word of God become man for our sake.  Statues and actors cannot depict this beauty in its fullness because they portray a fleshly sentimentality rather letting us glimpse and share in a spiritual reality. The Orthodox icon of the Nativity of Christ both depicts and joins us mystically to this event in which heaven and earth are united by God becoming man on earth.
Posted by Saint Edward Brotherhood at 07:24