Explanation of the Transfiguration Icon 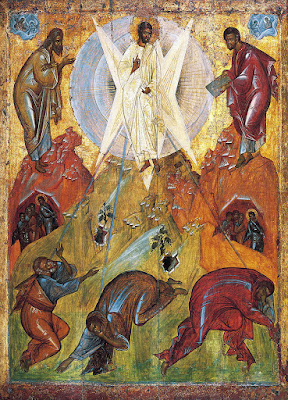 On 6th August we celebrate the Great Feast of the Transfiguration of the Lord. The icon of the Feast depicts the account we hear read in Matins (Luke 9:28-36) and at the Divine Liturgy (Matt. 17:1-9). This particular icon dates from the fourteenth century and was painted by Theophanes the Greek who was renowned for his work in Russian churches of that period.


The word ‘transfiguration’ means ‘change of form’. At the moment of the Transfiguration Christ revealed the glory of His divinity to the chosen disciples Peter, James and John who, as we hear in the Vespers of the Feast, cast themselves down upon the ground, unable to gaze upon the Form that none may see.

St. Peter is depicted on the bottom left of the icon, shielding himself from the Light with his left hand. St. John the Theologian is in the middle of the three disciples and his brother St. James, the Son of Zebedee, to his right.

This particular icon has some unusual features that are not found on most icons of the Transfiguration. Firstly, at the top of the icon, angels are shown summoning Moses and Elias to appear at the Transfiguration. Secondly, on the left-hand side of the icon Christ is depicted leading the three apostles up the mountain and leading them down again on the right-hand side.

In His left hand Christ holds a scroll symbolizing His Gospel and is surrounded by a circular ‘mandorla’ which represents His glory and divinity. The geometric shape within the mandorla represents the bright cloud which overshadowed the disciples (cf. Matt. 17:5). St. Gregory Palamas explains that the bright cloud cast a shadow because on this occasion the cloud was both light and darkness, overshadowing them by comparison because of its exceeding brightness.[1] St. Dionysius the Areopagite describes this paradoxical cloud as a dark cloud of unapproachable light.

The cloud overshadowed the disciples like a tent and provided more than the earthly shelter that St. Peter asked for when he said: ‘ Lord, it is good for us to be here: if thou wilt, let us make here three tabernacles; one for thee, and one for Moses, and one for Elias (Matt. 17:4). The Fathers teach that this cloud is the grace of the Holy Spirit that still shelters us.

At the Transfiguration the Trinity was therefore made manifest. The Son was transfigured, and the voice of the Father came out of the cloud revealing the consubstantiality of the Father with the Holy Spirit.

Because of this revelation, Mount Tabor is represented as a mountain with three peaks. At Christ’s right hand is depicted the Prophet Elias, and at his left the Prophet and God-seer Moses. Moses holds a stone tablet representing the Ten Commandments of the Law. Elias is portrayed as he is in other icons as an old man with long hair and beard.

Saint John Chrysostom offers another reason why Moses and Elias were chosen to appear with Christ as He was transfigured:

Both the one and the other had courageously withstood a tyrant: one the Egyptian (Pharaoh), and the other Ahab; and this on behalf of a people who were both ungrateful and disobedient… And both were simple unlearned men. One was slow of speech and weak of voice. The other a rough countryman. And both were men who had despised the riches of this world. For Moses possessed nothing. And Elias had nothing but his sheepskin. [4]

Even though he represents the Law in this icon, Moses was also a prophet. He saw the glory of the Lord in the cloud and the pillar of fire that guided the Israelites in the wilderness and prefigured the Transfiguration. The Prophets Moses and Elias also have something important in common. Both these saints had already experienced a secret vision of God on Mount Sinai and Horeb. We hear the accounts of these encounters with God during the Vespers service of the Feast.

Moses and Elias are depicted with halos in some icons. The three apostles Peter James and John are not, because at this stage they were not able to bear the brightness of the light as they had yet to receive the fullness of the Holy Spirit that they would receive at Pentecost. The Prophets Moses and Elias are able to bear the divine glory without being blinded – they are able to stand next to Christ as He is transfigured. In the icon, Moses and Elias stand touching the outer edge of Christ’s glory, signifying their previous illumination. Although both Moses and Elias were seen in this same glory, neither of them shone like the sun. The disciples were aware of the light, but were not able to look at it. This is because, as St. Maximus the Confessor teaches:

The Lord does not always appear in glory to all who stand before Him ‘To beginners He appears in the form of a servant (cf. Phil. 2:7); to those able to follow Him as He climbs the high mountain of His transfiguration He appears in the form of God (cf. Matt. 17: 1-9), the form in which He existed before the world came to be (cf. John 17:5). It is therefore possible for the same Lord not to appear in the same way to all who stand before Him, but to appear to some in one way and to others in other way, according to the measure of each person’s faith.[5]


Both St. Basil the Great and St. Gregory the Theologian clearly stated that the light of the Transfiguration is divinity – the light of the Godhead. This light is the uncreated energies of God.

No one has ever seen or can even comprehend God’s essence (what He actually ‘is’). We read in the prophecy of Jeremias that ‘no one hath stood in the substance and essence of the Lord’ (Jer. 23:18). Nevertheless, we can partake of God’s energies which are called grace. As Orthodox Christians we are called to become heirs of God and coheirs with Christ (cf. Rom 8:17). This union with God is what the saints have achieved; they have become gods by grace becoming, as Saint Maximus the Confessor teaches, in every respect as God is, except for His very essence.

In the icon, the uncreated light is symbolized by Christ’s white clothing and the golden lines illuminating His clothing and shining forth from Him. The radiant clothing also represents the letter of the Scripture which is bright to those who see in spirit the things of the spirit. It remains dark, however, to those who are not illuminated by grace.

This illumination will be granted to us if we truly draw near to God by practising the virtues and purifying ourselves of sin and the passions. We will then be changed and shine forth as the sun in the Kingdom of our Father (cf. Matt. 13:43).

Posted by Saint Edward Brotherhood at 08:45