A True Celebration of Christmas

Traditional Orthodox Christians celebrate the Nativity of Christ on 25th December according to the Old Calendar (7th January on the New Calendar). The Nativity Fast begins for us on 28th November (New Calendar) and therefore coincides with both the run-up to Western Christmas and the festival itself.

Western Christmas has become an almost completely non-religious festival in the UK, but the practice of giving gifts at Christmas has a Christian foundation. St. Nicholas of Myra, whose memory we celebrate on 6th/19th December, was the inspiration for Santa Claus due to his practice of leaving gifts anonymously for the poor. 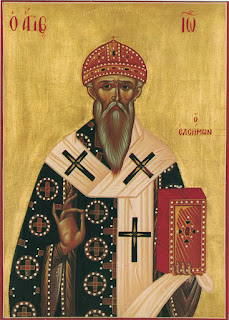 On the 12th/25th November, just before the start of the Nativity Fast, we celebrate two more saints who are famous for their deeds of mercy to the poor. St. John the Almsgiver (right) became Patriarch of Alexandra in 610 AD and immediately asked for a complete census of all the poor and beggars in the city – there were found to be over 7500.  St. John decreed that they were all to be clothed and fed every day and said: ‘Those whom you call poor and beggars, these I proclaim my masters and helpers. For they, and they only, are really able to help us and bestow upon us the Kingdom of Heaven.’


St. John also built hospitals and refuges for refugees feeling from the capture of Jerusalem by the Persians and used up the resources of the Church to feed and care for them. St. John reposed in 619 in his homeland of Cyprus.

In the Greek Church, the memory of St. Martin of Tours is also kept on 12th November. St. Martin, like St. John the Almsgiver, was known as ‘The Merciful’ during his life for his many acts of charity to the poor. 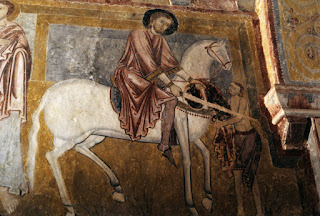 St. Martin was born in 316 in Pannonia (modern-day Hungary) but he grew up in Italy. Although his family were pagans, St. Martin received permission to become  a catechumen at the age of ten. Even at a young age, St. Martin was renowned for his acts of mercy to the poor, once cutting his military cloak in two in order to give half to clothe a beggar (left). St. Martin was mocked by his friends for this act, but that night Christ appeared to Him clothed in the cloak that St. Martin had given to the beggar. Christ said: ‘Martin, while still a catechumen has clothed me in this garment.'

St. Martin was baptized soon after and, following his discharge from the army, travelled to Poitiers and became a disciple of St. Hilary. In 371 the people of Tours compelled him to become their bishop. Saint Martin reposed in the year 397.

Using the examples of these two Saints, we can turn the feast of Western Christmas into a useful preparation for the celebration of Orthodox Christmas. The Nativity Fast is a time of repentance and spiritual struggle in order for us to be spiritually nourished and renewed on the Feast of the Nativity of Christ. The ever-memorable Metropolitan Cyprian explains this further:

It is certain that only the Christ-bearing faithful, that is, those who live their Christian calling and identity in repentance and holiness of life, and therefore believe unshakeably that in the God-Man ‘there dwells bodily the fullness of the Divinity’ ­–­ only they I repeat, are able to approach this great Feast and to appreciate its magnitude.  A necessary condition for one to live the Mysteries of our pure Orthodox Faith, and especially the Nativity of our Saviour Christ, is a personal rebirth and renewal through the life of Grace, which is granted to us in the God-built workshop of holiness, our Mother and nourisher, the Church.

Metropolitan Cyprian calls the Church a ‘workshop of holiness’ and this expression illustrates perfectly how we should understand the Church and our role in Her. St. Paul calls us to ‘work out your own salvation with fear and trembling for it is God who works in you both to will and to do of his good pleasure (Phil. 2: 12-13). Giving money to the poor (almsgiving) is part of this work we do in order to make sure our faith is living and not dead (cf. James 2:17).

It is only right that most of the money that our parish gives to charity each year goes to the help the poorest in the world. In the UK we simply do not have the depth of poverty that is found in developing countries where millions of people do not even have access to safe drinking water. Thousands die each day in these countries from a lack of things that we in the U.K. take for granted.

Nevertheless there are levels of poverty in some parts of Europe that have to be seen to be believed. Stranded migrants in Greece, for example, depend on our Church for food and medical care. Many elderly Greeks have to choose between medical care and food: they can’t afford both.

Western Christmas has, for as long as anyone can remember, been a time for eating, drinking and enjoying time with the family.  We should remember at this time those who do not have anyone to celebrate with, or even a house to celebrate in.

The festive period is an excellent chance to volunteer at a homeless shelter; volunteers are always needed at this time of year. Many Church of England families invite an elderly neighbour to Christmas Dinner and this is something that we should be doing too. Even though Western Christmas is a fast day for us there is nothing stopping us doing something creative with fish, wine and oil!

Our pure Orthodox Faith, therefore, is the foundation on which a true celebration of Christmas is built on.  As well as being renowned for their compassion, both St. John and St. Martin were unflinching in their opposition to heresy. St. John proclaimed the two natures of Christ in opposition to the Monophysites and St. Martin preached the Divinity of Christ thereby opposing the heresy of Arianism.
Following the example of these saints, we must never compromise our Orthodox Faith. However, genuine Orthodoxy does not consist in theoretically opposing wrong beliefs or theoretically believing correctly. It is only by being ‘rooted and grounded in love’ that we are able to know the ‘love of Christ which passes all knowledge’ (Eph. 3:17,19). If our correct belief is not demonstrated by love of our neighbour we shall be like the barren fig tree (cf. Luke 13:6-9) and consigned with those of whom Christ says: ‘I know you not’ (Matt. 7:23).
Posted by Saint Edward Brotherhood at 05:26