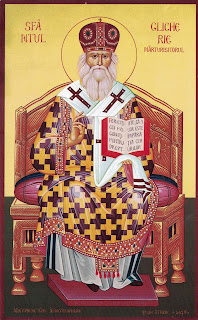 On 15th June on the Church Calendar we commemorate the Holy Hierarch and Confessor Glicherie of Romania. St. Glicherie was born on 9th February 1891 and named Gheorghe after the Holy Great Martyr George. His father died soon after he was born, and by the age of seven he was an orphan. Gheorghe spent his youth in purity of body and spirit and this naturally led him to the monastic life. He placed himself under obedience to Hegumen Theophil, abbot of the ancient monastery of Cetățuia.

On Christmas Eve 1916 Gheorghe was tonsured a monk taking the name Glicherie which means ‘one who is sweet’ in Greek. The new monk Glicherie’s obedience was to work in the kitchen, preparing food and tending the kitchen fire. Whilst fulfilling this hard obedience, he was careful not to miss the church services.

During World War One, a temporary hospital was set up in the monastery to care for the sick and wounded. Undisciplined soldiers, however, often stole from the monastery. When Fr. Glicherie found a soldier stealing vegetables from the monastery garden he told the soldier that there was no need to steal, but only to ask for food and he would be given it. The soldier’s heart, however, was unrepentant. The next day, Fr. Glicherie found the soldier dead, his hand still holding a green pepper which he had stolen. The unexplained death of another soldier stealing vegetables led to the Metropolitan of Moldavia visiting the monastery to advise the soldiers to ask for more food from the monks rather than stealing it.

Fr. Glicherie was ordained deacon in January 1918 and priest two years later. He continued in his various monastic obediences and was later appointed abbot of the Pokrov skete in Neamț where he was joined by his fellow-ascetic Hierodeacon David.

The Fathers of the Pokrov skete had been studying the calendar question carefully. Rejecting both pressure and promises of earthly glory Fathers Glicherie and David fled to the mountains so they could worship according to the Church calendar.

Father Glicherie was troubled by the thought that he might be making a mistake considering that the Church leaders and intellectuals had accepted the New Calendar. One night he beheld himself in a vision swimming alone against huge waves. As he began to despair, he saw Christ coming to him, walking on the water. Christ raised him up from the sea and from his despair.

In 1927 the two fathers travelled to Mount Athos where they were tonsured to the Great Schema. On their return to Romania they settled again in their little hut, surrounded by the other monks that they had gathered.

On the Great Feast of Theophany, 1929, the persecution of the Fathers started in earnest when they were denounced by the local New Calendar priest. As a result the police raided the huts and arrested the two fathers. Although they were released by a judge, the same priest accused them of being ‘enemies of the state’ later in that year. This priest joined the police in looting the chapel even sitting on the Holy Table and smoking cigarettes. As a result of his false accusation Fr. Glicherie spent three months in prison where he was severely tortured.

The courts refused Fr. Glicherie permission to return to his hut after his release from prison. He also had to live in hiding due to the frequent police raids. During this time he was given aid and shelter by pious Orthodox Christians.

Fr. Glicherie travelled to Jerusalem in the following year where he served the Liturgy in many of the churches. On Pascha he served with Archbishop Anastassy who later became First Hierarch of the Russian Church Abroad.

This was an important period for the traditional Orthodox Christians of Romania. A new church was built in Rădășeni and others in neighbouring districts. Fr. Glicherie was serving in this church on the Feast of the Apostles Peter and Paul when he was attacked and viciously beaten by the police. His parishioners rescued him and hid him, tending his wounds. Throughout this time of persecution Fr. Glicherie taught his flock not to repay evil with evil, but to demonstrate their fear of God by their peaceful demeanour.

In 1936 Fr. Glicherie travelled to the Holy Mountain to find an Old Calendar bishop to return with him to Romania but he was unsuccessful. On his return, he blessed sites for new churches, but the growing number of Old Calendar Orthodox Christians caused certain New Calendar priests to react with hatred.

Fr. Glicherie was slandered by them for being both a communist and a member of the fascist Iron Guard movement. They did this in order to have him found guilty of a crime that carried the death penalty; he was duly arrested in 1939 and sentenced to death.

Fr. Glicherie was imprisoned in a camp as part of a group of eighty prisoners who were scheduled to be shot in two groups of forty. Fr. Glicherie was assigned to the second group. After hearing the shots and screams as the first forty were killed he prepared for death with prayer, as did the other prisoners. However, it was revealed to Fr. Glicherie as he was praying that all their lives would be spared and so it came to pass. Just before the scheduled execution of the second group the government decided that the prisoners should be released.

Nonetheless, the persecution of the traditional Romanian Orthodox Christians continued. Fr. Glicherie, in particular, was targeted by the authorities. In 1941 he was forced to flee again and hid in the forests near the village of Slătioara where he and Fr. David were given help by the villagers. It was here that the Monastery of the Transfiguration (below) was constructed. 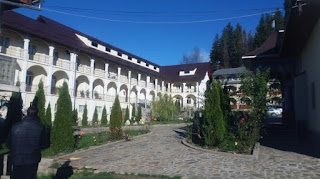 As World War Two drew to a close, work began to rebuild the churches destroyed by the pre-war persecutions.  However, the Romanian Old Calendar Church still had no bishop. They were not able to invite bishops from abroad because of the danger involved in visiting Romania at this time. This situation could not be allowed to continue.

On May 21st 1955 Bishop Galaction arrived at the newly finished Monastery of the Transfiguration and was met by Fathers Glicherie and David who had suffered so much for the Orthodox faith. Bishop Galaction was forced by the authorities to leave the monastery shortly afterwards, but while in exile he consecrated Bishops Evloghie, Meftodie and Glicherie. On the day after his consecration, Bishop Glicherie returned to the Monastery of the Transfiguration at Slătioara which he had founded. He remained there until his repose on June 15th/28th 1985.

Holy Hierarch Glicherie pray to God for us!
Posted by Saint Edward Brotherhood at 11:53