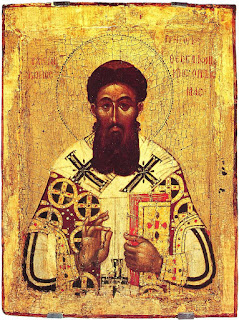 On the Second Sunday of Great Lent we commemorate Saint Gregory Palamas, the Archbishop of Thessalonica. Saint Gregory Palamas is particularly renowned for his defence of traditional Orthodox monasticism and the Church's teaching concerning grace against the attacks of Barlaam and Acindynus. The heresies promoted by these two men led to the Orthodox Church condemning their teachings at various councils in the middle of the fourteenth century. This dispute is called the hesychastic controversy by historians. The word ‘hesychasm’ comes from the Greek word for ‘quiet’ or ‘silence’.

The original Greek texts dealing with this subject are very complicated but, simply put, both Barlaam and Acindynus taught that the grace of God is created and also objected to the spiritual practices of Orthodox monasticism. These opponents of Saint Gregory were heavily influenced by Roman Catholic teachings concerning grace. Indeed, following his condemnation at the Orthodox council of 1341, Barlaam converted to Roman Catholicism and was made a bishop. Barlaam is not a particularly famous historical figure, his most memorable contribution was to coin the phrase ‘navel gazing’ which he used to mock the monks of the Holy Mountain.

Saint Gregory, himself a monk of the Holy Mountain, vigorously defended traditional Orthodox monasticism and in particular the importance of physical and mental stillness in prayer. This physical stillness was what Barlaam attacked with his accusation of 'navel gazing'.

Saint Gregory, in accordance with the earlier Church Fathers, taught that these practices of prayer, stillness and the guarding of the thoughts lead to union with God through partaking in His uncreated energies. The aim of the Christian life to become gods by grace – the transformation that the saints have undergone.

As an illustration we can think about the sun; its rays shine and we feel them and see them. However, the sun’s rays are not small suns that are thrown at us from the sky ­– the sun doesn’t become less hot, or less bright, when it shines on us! We know that the sun we feel on our skin is simply energy from the sun. We are partaking of the energy of the sun but we are not actually feeling the sun itself in its essence or ‘sun-ness.’ If we felt even 1% of the sun’s essence we would be destroyed by the heat! So we can say that the sun’s essence is unapproachable, but its energies are approachable.

However this analogy with the sun is not quite correct because God’s energies are not ‘God-waves’  – they are God. They are, however, not God’s essence but his energies. In contrast, the energy that comes from the sun is not ‘sun’, but the light and energy of the sun.

In summary, God’s energies are God, but they are not His essence. God’s essence is beyond all names, manifestation and participation. God's energies, on the other hand, are divine, uncreated and communicable; if they were not, they would not be God Himself, and would be unable to deify us and unite us with Him.

Saint Gregory Palamas often used the example of the light that the Apostles saw on Mount Tabor when Christ was transfigured to illustrate the uncreated nature of God’s energies. The Light on Tabor was God’s energy appearing as Light – this Light is therefore uncreated because God’s essence is uncreated.

Barlaam, on the other hand, believed the Light of Transfiguration to be created, and considered it inferior to the reasoning and logical thoughts of the philosophers. He thought that the ancient philosophers were superior to the Prophets and Apostles because grace (being created in his opinion) is always inferior to knowledge and learning. The correct Orthodox teaching of Saint Gregory Palamas is summarized in the Ikos read during matins on the Second Sunday of Great Lent:

Thou wast seen on earth as an angelic messenger, proclaiming unto mortal men the mysteries of God. Endowed with a human mind and flesh, yet speaking with the voice of the bodiless powers, thou didst astonish us, O herald of God, and didst persuade us to cry to thee such things as these:

Saint Gregory was present at the councils of 1341 and 1347 which condemned the belief that grace is created. The opponents of Saint Gregory continued their attacks on him, but his Orthodox theology was confirmed once and for all at a synod in Constantinople in 1351. Saint Gregory reposed in peace in 1359.

Posted by Saint Edward Brotherhood at 08:27