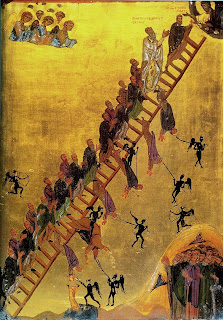 On the Fourth Sunday of Great Lent we commemorate Saint John Climacus. Saint John lived in sixth century Egypt and entered the monastic life as a teenager spending nineteen years in obedience to the Elder Martyrius. He was then given a blessing to live in solitude and lived forty years as a hermit Saint John’s solitary life ended when he was chosen to become abbot of the monastery at Mount Sinai. It was there that Saint John wrote his famous book The Ladder of Divine Ascent which consists of thirty steps – each step being a homily on a particular aspect of the spiritual life. St. John is named ‘of the Ladder’ or ‘Climacus’ (a Latinisation of the Greek word for ‘ladder’) after his important work.

The Ladder was written as a guide for monastics, but it is not a rulebook only applicable to monks. In fact, it is not a rulebook at all!  St. John uses practical examples to illustrate his points and explores the psychology of the spiritual life in a way that is easily readable for both monastics and laypeople.

As traditional Orthodox Christians we understand the importance of trying to live the ascetical life; struggling against the passions by asceticism (lit. ‘training’) is essential if we want to consider ourselves to be Genuine Orthodox Christians. Christ Himself says: ‘Take no thought for your life, what ye shall eat, or what ye shall drink; nor yet for your body, what ye shall put on. Is not the life more than meat, and the body than raiment?’ (Matt. 6:25) Saint Philaret of New York explains:

People forget that the path of Christianity is indeed an ascetical labour. Last Sunday we heard how the Lord said: ‘He that would come after Me, let him take up his cross, deny himself and follow Me.’ The Lord said this with the greatest emphasis. Therefore, the Christian must be one who takes up his cross, and his life, likewise, must be an ascetic labour of bearing that cross. Whatever the outward circumstances of his life, be he monk, or layman, it is no consequence. In either case, if he does not force himself to mount upwards, then, of a certainty, he will fall lower and lower.[1]

The Sunday of the Cross, that Saint Philaret refers to above, falls between the commemoration of two great monastic saints: Saint Gregory Palamas and Saint John of the Ladder. Both these saints were great ascetics from their youth and although they lived many centuries apart, they both struggled in similar fashion and both stressed the necessity of asceticism and unceasing prayer in order to achieve vision of God. We hear this in the sessional hymn to Saint John sung after Ode Three in Matins:

Shining with the glory of the virtues, thou hast made thine abode in heaven, and in holiness thou hast ascended to the boundless depths of divine vision. Thou hast exposed to mockery all the snares of the demons, protecting mankind from their cruel violence. Now, O John, thou blest ladder of the virtues, thou intercedest that thy servants may all be saved.

The divine vision referred to above is the enlightenment of the highest part of the soul (nous) through which we attain spiritual knowledge. The Greek word theoria that we have translated as ‘divine vision’ is often translated as ‘contemplation’.

There are different stages of divine vision and the theology involved is quite complicated. Simply put, in order for the nous to be illumined by divine vision, it must be purified by keeping the Gospel Commandments. Most of us are still struggling against the sins and passions and we are very far from illumination – let alone the higher aspects of divine vision. For this reason Saint John, in The Ladder of Divine Ascent, gives a lot of guidance on how to overcome sins and passions because without purifying ourselves from lust, anger, hatred, greed and the rest of the passions we can never ascend to divine vision. This principle is summarized in the saying of Saint Isaac the Syrian: ‘purity sees God’.

The first step in The Ladder is entitled  ‘on renunciation of the world’. Lay people are not required to renounce the world but they should struggle against covetousness and renounce worldy ways of thinking. Saint John Climacus teaches that by despising material possessions a layperson will be delivered from quarrels; a covetous monk, on the other hand, will ‘fight to death for a needle’.[2] He continues:

Some people living carelessly in the world have asked me: ‘We have wives and are beset with social cares, and how can we lead the solitary life?’ I replied to them: ‘Do all the good you can; do not speak evil of anyone; do not steal from anyone; do not lie to anyone; do not be arrogant towards anyone; do not hate anyone; do not be absent from the divine services; be compassionate to the needy; do not offend anyone; do not wreck another man’s domestic happiness and be content with what your own wives can give you. If you behave in this way, you will not be far from the Kingdom of Heaven. [3]