The Sunday of the Myrrh-bearing Women

On the Second Sunday after Pascha we commemorate the myrrh-bearing women who came to anoint Christ’s body very early in the morning of the Resurrection. We heard this account (Mark 16:1-8) read at the beginning of the Paschal matins:


And when the Sabbath was past, Mary Magdalene, and Mary the mother of James, and Salome, had bought sweet spices, that they might come and anoint him. And very early in the morning the first day of the week, they came unto the sepulchre at the rising of the sun. And they said among themselves, Who shall roll us away the stone from the door of the sepulchre? And when they looked, they saw that the stone was rolled away: for it was very great. And entering into the sepulchre, they saw a young man sitting on the right side, clothed in a long white garment; and they were affrighted. And he saith unto them, Be not affrighted: Ye seek Jesus of Nazareth, which was crucified: He is risen; He is not here: behold the place where they laid him. But go your way, tell His disciples and Peter that He goeth before you into Galilee: there shall ye see Him, as He said unto you. And they went out quickly, and fled from the sepulchre; for they trembled and were amazed: neither said they any thing to any man; for they were afraid. 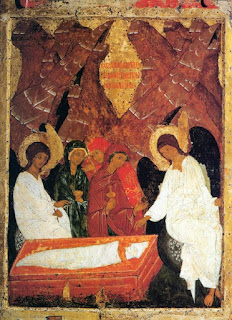 The myrrh-bearers are those women disciples of Christ who stood with His Mother at the time of the crucifixion and came to anoint Christ’s body with sweet-smelling spices. Myrrh is the fragrant dried resin of a tree that is produced in a similar way to frankincense; the tree is slashed and the trees bleed the liquid resin which is then dried in the sun. In Orthodoxy, myrrh is not burnt as incense but it is used in preparing the sacred Chrism.

The myrrh-bearing women were the first witnesses to the bodily resurrection of Christ. On this Sunday, we also commemorate Joseph of Arimathea and Nicodemos the secret disciple because they prepared Christ’s body for burial and laid it in a new tomb.

We do not know all the names of the myrrh-bearers but of those whose names are known, the first is the Theotokos who many of the Fathers tell us is the ‘Mother of James and Joses’ mentioned in the Matthew 27:56 and Mark 15:40. These two men were the sons of Saint Joseph the Betrothed by a previous marriage so the Theotokos is their stepmother. The Orthodox Church has always taught that the Virgin Mary, the Theotokos, was a virgin before, during and after childbirth so she is not, of course, the biological mother of James and Joses.

Saint Gregory Palamas, in his homily for this Sunday, teaches that it was the Archangel Gabriel that announced the Resurrection of Christ to the Mother of God, just as he had proclaimed to her the good tidings of the Annunciation:

When the Theotokos, together with Mary Magdalene, heard the Good News of the resurrection from the angel, only she understood the meaning of the words. In the same way now when, in the company of the other women, she met her Son and God, she was the first of them all to see and recognize the risen Lord, and falling down before Him she grasped His feet and became His apostle to the apostles.[1]

Rising up early and coming with earnestness unto Thy tomb, the myrrh-bearers sought for Thee so as to anoint Thine immaculate Body, O Christ. And having been informed by the words of the Angel, they preached to the Apostles the tokens of joy: that the Author of our salvation is risen, having despoiled death and granting the world eternal life and great mercy.[2]


The other myrrh-bearers whose names have come down to us are Saint Mary Magdalene; Mary the wife of Clopas; Joanna, wife of Chouza; Salome the mother of the sons of Zebedee; Mary and Martha the sisters of Lazarus; and Susanna.

The fact that the myrrh-bearers have a Sunday dedicated to them is significant for a number of reasons. Christ is referred to as the New Adam because by His incarnation He renewed and recreated Adam’s nature. Christ appeared first to women because it was fitting that just as Eve was the first person to see Adam, so a woman should be the first to see the risen Christ, the New Adam. Saint Ambrose of Milan also refers to Eve when he says: ‘because death had before issued through the mouth of a woman, life is restored through the mouth of a woman’ (cf. John 20:18).

The dedication of the myrrh-bearers is also an example for us. When Christ was betrayed we hear in the Gospel that ‘all his disciples forsook him and fled' (Mark 14:50). The Apostle Peter actually denied Christ three times when questioned. In contrast, the women disciples remained with Christ during his crucifixion together with the Theotokos and the Apostle John the Theologian.

The actions of the myrrh-bearing women are an example for us, particularly when we desire to approach the Holy Mysteries. The Venerable Bede teaches:

The spices which the women bring signify the scent of virtue, and the sweetness of prayers through which we ought to approach the Altar. The rolling back of the stone alludes to the revealing of the Holy Mysteries which were concealed by the veil of the letter of the law written on stone; this covering has now been taken away, the dead body of the Lord is not found, but the living body is preached… Let us then, following the example of the devout women, whenever we approach the Heavenly Mysteries, either because of the presence of the angels or from reverence to the Sacred Offering, bow our faces to the earth with humility recollecting that we are but dust and ashes.


We hear in the hymns of the Church that the myrrh-bearers followed in Christ’s steps with zeal and did not abandon Him even after His death on the Cross. Let us therefore emulate their faith and zeal pouring forth tears of repentance as they did tears of grief; let us pray that with them we might be counted worthy of the endless joy of the Resurrection in the Kingdom of Heaven.