On the Divinity of our Lord Jesus Christ

Homily on the Day of the Lord’s Transfiguration

By our Venerable Father Ephraim the Syrian, the Deacon + 373 A.D. 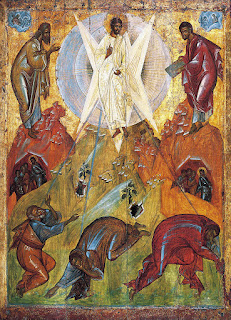 Our Saviour led the Apostles up into the mountain to show them the glory of His Divinity and to grant them to know that He is the Redeemer of Israel, as He had declared through the Prophets, and so that they would not be tempted concerning Him, when they would see His voluntary Passion, which He was to suffer for our sakes in His human nature.  For they knew Him as a man, but they did not comprehend that He was God.  They knew that He was the Son of Mary, a man, living with them in the world.  And on the mountain He gave them to comprehend that He is the Son of God, and God.  They saw that He ate and He drank, that He was wearied and that He rested, that He became tired and that He slept, that He experienced fear and that He poured forth sweat, but all of this did not correspond to His Divine nature, but pertained only to the human. Therefore He led them up into the mountain, so that the Father might proclaim His Son, and so that He might show them that He was in actuality the Son of God, and God.

He took them up into the mountain and He showed them the glory of His Divinity before the Resurrection so that when He rose from the dead in the glory of His Divine nature, they would understand that He had not received that glory as a reward for this feat, or as one who had been in need of such glory, but that before the ages the glory had been His together with the Father and of the Father, as He Himself said when going to the voluntary passion: O Father, glorify Thou Me with Thine own Self with the glory which I had with Thee before the world was (John 17:5).

Thus this glory of His Divinity, invisible and hidden in the human nature, was manifested to the Apostles on the mountain. They saw His face shining like lightning, and His clothes white as light. The disciples beheld two suns: the one was visible to them and was shining upon the world from the firmament, and the Other manifested His face to them alone.  His clothing appeared white as light, because from His whole Body the glory of His Divinity poured forth, and in all the members of His flesh the light shone forth.  It was not as with Moses; it was not something exterior to Him that lightened His flesh with splendour, but rather the glory of His Divinity pouring forth from Him; His light rose up from within Him and in Him was it concentrated; it did not transfer from Him to something else, thus leaving Him; it did not strike Him from the side so as to adorn Him, and it was not something borrowed for Him.  Nor did it show them the whole abyss of His glory, but only as much as the pupils of their eyes could apprehend.

There appeared unto them Moses and Elias talking with Him (Matt. 17:3). Thus the ascent of the mountain was a joy to the prophets and the Apostles.  The prophets rejoiced seeing His humanity, which they had not known; the Apostles rejoiced seeing His Divinity which they had not apprehended.  And when they heard the voice of the Father, bearing witness to the Son, they understood thereby what had not formerly been clear to them: that He had become man. And together with the voice of the Father, the glory of His body, with which unalterably and unconfusedly the Divinity was united in Him, and which glory had become manifest, bore testimony to them.  And the testimony was sealed by three voices, that of the Father, as well as those of Moses and Elias, who stood before Him as servants.

And they looked one upon another, the prophets upon the Apostles and the Apostles upon the prophets.  The leaders of the Old Testament and the leaders of the New Testament beheld each other there. Moses the holy beheld the sanctified Simon. The steward of the Father’s house saw him who had given lodging to the Son.  The one had divided the sea, so that the people might cross between the billows; the other had proposed a tabernacle so that he might build the Church.  Elias looked upon John; he who had ascended in a fiery chariot upon him who had leaned upon the burning breast.  Thus this mountain became an image of the Church, and Jesus unites therein the two Testaments which the Church accepts, and He gave us to comprehend that He Himself is the Giver of both Testaments: the one received His mysteries and the other manifested the glory of His works.

And Peter said: Let us make here three tabernacles, one for Thee, and one for Moses, and one for Elias (Matt. 17:4). Simon was sent to build the Church in the world, and behold he makes three tabernacles on the mountain, because he still regarded Jesus as a man and places Him on a level with Moses and Elias.  But the Lord immediately shows him that He does not require his tabernacles, because He is the One Who for the course of forty years provided a tabernacle of cloud for his forefathers in the wilderness.  For as he yet spoke, such a bright cloud overshadowed them (Matt. 17:5).  Behold, Simon, a tabernacle made without travail, a tabernacle which protects from the heat and in which there is no shadow, a tabernacle which is like lightning and radiant.

While the disciples yet wondered, the voice of the Father was heard from the cloud: This is My beloved Son, in Whom I am well pleased; hear ye Him.  The Father speaks of the Son, not separating Him from the glory of the Divinity. For the Father and the Son with the Holy Spirit are of one Nature, one Power, one Essence and one Kingdom.  And He addresses the One with a name which is not exalted, but is awesome in its glory.  Mary also calls Him Son, Who in His human body is not separated from the glory of His Divinity. For One is God, Who was manifest in the world in the body. His glory proclaims His Divinity which is from the Father, and His body proclaims His human nature which is from Mary, for both natures have been united in the one hypostasis.  The Only-Begotten of the Father is the only One born of Mary.  And whosoever would separate the natures in Him will themselves be separated from His Kingdom, and whosoever should confuse them will have no part in His life.  Whosoever denies that Mary gave birth to God will not see the glory of His Divinity; and whosoever denies that He bore flesh free from sin, such a one will not be granted salvation and life, which are granted through His body.  His deeds themselves and His Divine powers instruct those of sound judgment that He is true God.  And His sufferings show that He is true man.

Yet the Prophets abode in the truth and their testimonies are not lies. For what they were commanded, that they spoke through the Holy Spirit. For this reason also the chaste John, who leaned upon that flaming breast, confirming the prophetic saying, theologising in the Gospel, instructs us, and says: In the beginning was the Word, and the Word was with God, and the Word was God…All things were made by Him, and without Him was not anything made that was made… And the Word was made flesh, and dwelt among us (John 1:1, 3, 14).  The One Who is of God, God the Word, the Only-Begotten Son of the Father, of one essence with the Father, the One Who is from the One Who is, the pre-eternal Word, inexpressibly begotten of the Father without mother before all ages, the Same in the last days was born of a daughter of mankind, from Mary the Virgin without father; He was born God incarnate, bearing in Himself flesh taken from her, made man, which formerly He was not, and remaining God, which He was, so that He might save the world.
Originally published in the August 2014 issue of The Shepherd

Posted by Saint Edward Brotherhood at 04:20