The New Martyr Eugene the Soldier 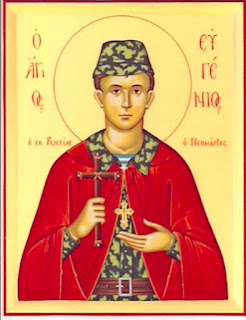 EUGENE was born 23rd May, 1977, in the village of Kouilovo, near the town, Podolsk, just outside of Moscow. He was an only child, and was baptised an Orthodox Christian as an infant.  His mother’s name is Lioubov (Love) Vasilievna.

In 1989, his grandmother took him to church to confess for the first time and to commune the Holy Mysteries.  The priest noticed that the child was not wearing a cross, and during confession he placed a cross around his neck.  The young Eugene never took it off; he made a thick cord and hung the cross on it. When his mother noticed that he was wearing a cross, she advised him to take it off because his school friends would make fun of him. Eugene did not answer, but neither did her obey her.

He finished his studies in 1994 and was then employed as a cabinet-maker, which gave him a good income.  He joined the army on 25th June, 1995, and after his basic training (on 13th January, 1996) was stationed for guard duty at the border of Chechnya-Ingushetia.  On 13th February, 1996, exactly one month later, he was captured.  Here is how it happened.

Four soldiers were sent by the army service (Eugene being one of them) to check vehicles which came from a particular road.  Unfortunately, the officials sent the soldiers without any previous organization or preparation; there wasn’t even lighting or any type of security. Chechens would frequently pass along that road transporting weapons, prisoners and drugs.  That night an ambulance passed along the road.  When the soldiers stopped it for inspection, suddenly more than ten heavily armed Chechens jumped out of it.  A brawl followed and the four soldiers were taken prisoner by the Chechens.  It was 3 a.m.  At 4 a.m., other soldiers arrived at the road for guard duty, to relieve Eugene and his companions.  When they did not find them, they immediately realized what must have happened. A few days later, the army service informed the soldiers’ parents of their disappearance.

Eugene’s mother understood that they had been captured and, placing her life in danger, went to Chechnya to find her son.   After many attempts, she came in touch with the leaders of various rebel groups in Chechnya, trying to find the whereabouts of Eugene.  She knew that the Chechens do not kill their prisoners immediately, but wait to see if they can get a ransom and only then set them free.

The Chechens told her that her son was alive but was a prisoners.  They motioned to each other and then became silent trying to approximate the amount of money they could get from her.  At that time, the price for an imprisoned soldier was 10,000 dollars, while for an officer 50,000 dollars.  When they realized that they would not get much for Eugene they decided to kill him. His mother went everywhere searching for him, she went past villages, roads with mines, battle fronts, and met many Chechen officers.  As she herself says, “I went through all the circles of Hades.”

From the first day of Eugene’s imprisonment (which lasted 100 days), the rebels noticed that he was wearing a cross.  They tried forcing him to deny his Faith, to take off his cross and become a Muslim, with the intention of making him an executioner and thus a murderer of other Russian prisoners. Eugene refused all their proposals and, despite continuous beatings, many tortures and promises (that he would live if he took off his cross), they couldn’t manage to make him deny his Faith. Later, the same rebel leaders said to his mother: “If you son had become like one of us, we would not have been unjust to him."

On 23rd May, 1996, (the day of his birthday), the four imprisoned soldiers were taken to be executed.  First they killed his three fellow prisoners.  Then they asked Eugene for the last time to remove his cross, saying: “We make an oath to Allah that you will live.”  Eugene refused again, and thus went through his horrifying martyrdom.  They cut off his head completely with a knife, but they did not dare take the cross off his neck.  They buried him with the cross, but without his head. Finally, after nine months, Eugene’s mother found him. The Chechens wanted 4,000 dollars in return for his body.  They gave her a video of he son’s martyrdom and told her about his imprisonment and torture.

Eugene’s mother sold her apartment and everything else she could - even clothes - in order to be able to give the ransom and also pay for the exhumation, a suitable coffin, transportation, etc., which was not a small amount. Finally, on 20th November, 1996, she transported the relics to their village and buried them in the cemetery.  A few days later, Eugene’s father died next to the grave from his sorrow. Immediately, the Holy martyr Eugene began appearing and performing miracles n different areas of Russia.  Below we mention some testimonies and miraculous interventions.

A little girl who lived in an Orthodox orphanage said that once a tall soldier with a red cloak appeared to her and told her that his name was Eugene.  He took her by the hand and directed her to the church.  The little girl said: “I was startled when I saw he was wearing a red cloak, because soldiers don’t wear cloaks like that, and I thought to myself that it must be the cloak of a Martyr.” In many churches people have seen a soldier with a flaming red cloak who helps prisoners in Chechnya escape from their captivity and from every other danger, such as mines, etc.

In a hospital with war casualties, the wounded soldiers testify that a Holy Martyr with the name of Eugene helps them, especially when they are in a lot of pain.  When some of them went to the church dedicated to the saviour in Moscow, upon seeing the icon of the Martyr, they immediately recognized him as the one who had helped them.  Even prisoners recognize the soldier with the red cloak.  He especially helps those who are very weak and spiritually down because of their imprisonment.

In 1997, with the blessing of Patriarch Alexis, a book was published with the title “New Martyr of Christ Soldier Eugene.”  A priest by the name of Vadim Skliarensko from Dnipropetrovs K sent a report to the Patriarchate where he mentions that the cover of the book with a photograph of the Saint sends forth fragrant myron. Three years and three months after Eugene’s martyrdom, the leader and all the members of the rebel gang (Eugene’s killers) were themselves killed in a confrontation with their fellow Chechens.

Many faithful visit Eugene’s tomb throughout the year but mostly on the day of his martyrdom (10th / 23rd May).  On that day one can hear of many miracles worked by him.  He has not yet been glorified as a saint, so as the avoid any misunderstanding.

THIS ACCOUNT was sent us by Abbess Taxiarchia and the sisters of the Sacred Convent of the Holy Angels in Afidnai, Greece, along with a beautiful icon print of the New Martyr in his red cloak.  Sister Myrofora of the Convent writes: “The article on St Evgenios was published on [the] internet in Greek.  Someone sent it to one of the brothers in the Monastery [Fili] and then they passed it on to us.  The icon which we sent to you of St Evgenios was painted by one of the sisters in our Convent.”  In view of the current cross-wearing controversy in Britain, the witness of St Eugene is particularly instructive for Orthodox Christians.  May his holy prayers strengthen us in our confession of the Faith.
Posted by Saint Edward Brotherhood at 02:01