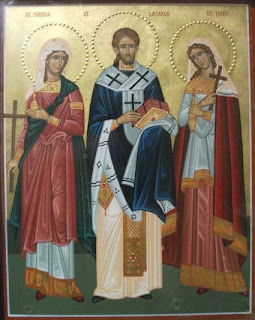 On the Saturday before Palm Sunday the Orthodox Church celebrates Christ's raising of Lazarus, the brother of Martha and Mary, from the dead. This event is recorded in the Gospel of Saint John.

On the previous Sunday we heard in matins the canon of repentance which centres on the parable of the rich man and Lazarus. In the weekday services we still hear about this parable, but also we begin to hear about the sickness and death of Lazarus the brother of Martha and Mary.

However, it's important not to confuse the parable of the rich man and Lazarus with the historical figure of Lazarus who was raised from from the dead on the fourth day.

The parable of Lazarus and the rich man instructs us to be merciful to the poor especially during as the season of Great Lent draws to a close. The celebration of the raising of Lazarus on this coming Saturday is a foreshadowing of Christ's Resurrection which we celebrate on Pascha.

On Lazarus Saturday, special resurrection hymns are combined with those of St. Lazarus and they  replace those normally used for the dead on every Saturday of the year. Conversely, on Palm Sunday the resurrection hymns appointed for the tone are set aside and a replaced by hymns for the feast of Palms.

After his first rising from the dead St. Lazarus became bishop of Kition in Cyprus and reposed in peace. His relics were translated to Constantinople in the year 890.

The icon above depicts St. Lazarus vested as a bishop and flanked by his two sisters. The icon was painted by the sisters of the Convent of St. Elizabeth in Etna and was commissioned in memory of Christakis Cleovoullou, who was from Cyprus, where St Lazarus was Bishop, and who fell asleep in the Lord on Palm Sunday, 2010.  It was purchased with a donation he gave us on the day of his repose, having that morning served in the altar at the Liturgy.
Posted by Saint Edward Brotherhood at 06:01